The performance “Dancing Sketches” was designed and realized for the G. Gounaropoulos Museum, in the context of the temporary exhibition Dance & Image: a dialogue between contemporary dance and the visual arts, that was organised in collaboration with the Isadora & Raymond Duncan Dance Research Center, Athens.

The performance “Dancing sketches” explores the relationship between dance and painting, as well as the boundaries between the two art forms in a specific context, and their mutual overturn.
The visual artist created, in her studio, a work of art specifically for the performance through a process of “full body gesture”. The artwork was then passed onto the dancer, who was encouraged to develop on the canvas her own narrative, through her dancing body, in the space of the Museum.
The boundaries were tested, as the performance, rather than being a live work in progress, became limited to a remote interaction between the two artists. Additionally, the performance instead of being a live event addressed to an audience, took place as a solitary “conversation in two acts”, creating a dialogue with an unpredictable artistic result. 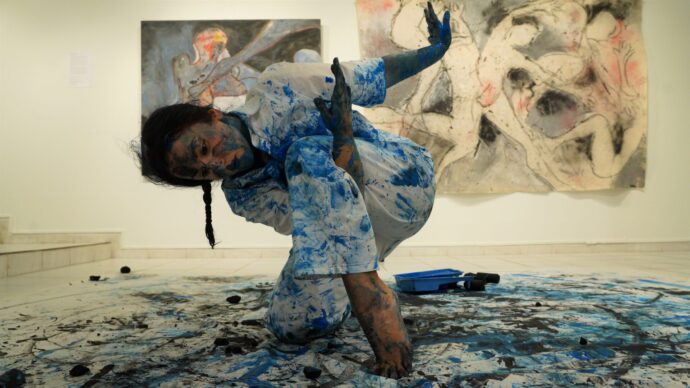