Giorgos Gounaropoulos (G. Gounaro) was born on 22 March 1889 in Sozopol, a small town on the Bulgarian Black Sea coast. The town had been a Milesian colony in ancient times, and it had been called Apollonia in honour of Apollo, the Greek god of light. From the Byzantine era to the beginning of the 20th century, Sozopol had been inhabited by Greeks.

Gounaropoulos was the son of Anna and Elias, and he was the fourth and youngest child in the family. He spent his childhood and adolescence by the sea, in an evocative, rocky landscape, a place filled with myth and lore. These stimuli triggered his imagination and shaped his psyche in a way that would later manifest in his artistic work.

During the early 1900s, the Bulgarian government started pressuring the Greek population to adopt the Bulgarian national identity, so the family decided to emigrate to Greece. For a short period of time they lived in various Greek cities; finally, they settled in Athens. Living conditions in 1904 Athens were quite hard, so the young Gounaropoulos put his natural flair for drawing to use and worked for various signboard makers to help provide for his family. 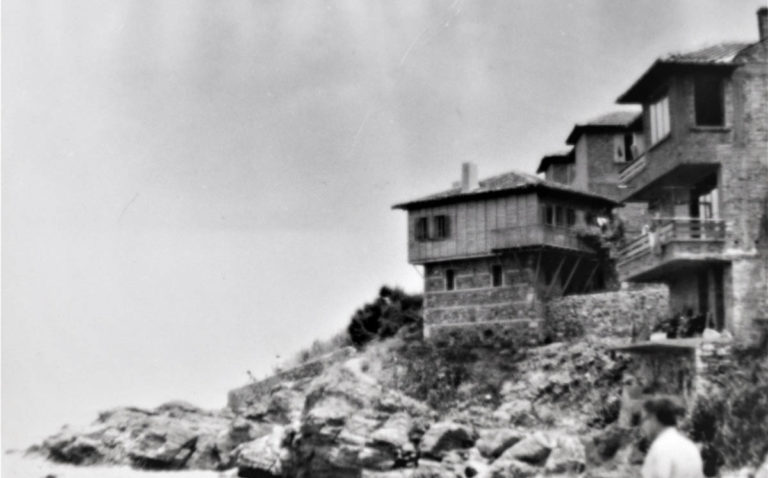 The neighbourhood of Gounaropoulos in Sozopol 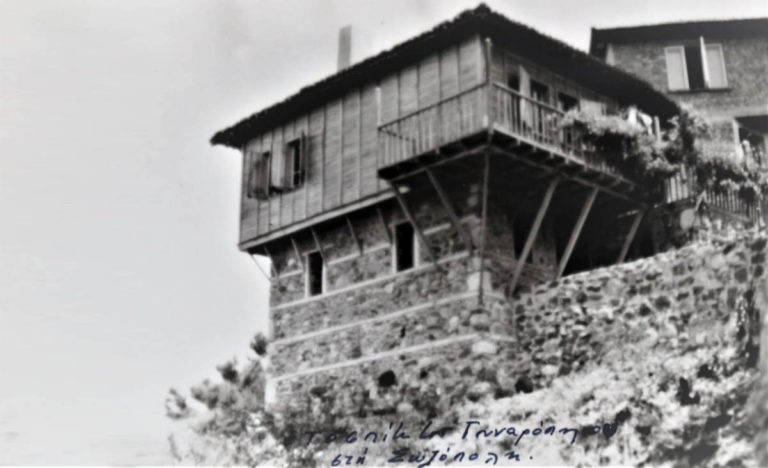 The house where the artist grew up

After receiving numerous awards and distinctions during his studies, he graduated in 1912, presented with the Thomaidio award.

In 1913 he was conscripted into the Greek Army and took part in the Second Balkan War and the First World War. Meanwhile, he successfully participated in the Averofian Competition and was granted a scholarship to pursue further studies in Paris.

In 1919, after the end of his military service, he set off to the French capital.

At first, Gounaropoulos enrolled at the ‘Académie Julian’, where he studied until 1924. He then worked in theatre as a decorator while continuing his studies at the ‘Académie de la Grande Chaumière’ (1924-1925).

Meanwhile, he had the opportunity to acquaint himself with a plethora of artworks exhibited in museums and to take in the artistic preoccupations and tendencies of his contemporary artists in the Parisian galleries.

At the same time, he delved into the landscape and light of Paris and southern France. He started to form his personal artistic style and exhibited his work at the ‘Salon National des Beaux Arts’, the ‘Salon d’Automne’ and the ‘Salon des Indépendants’, to warm critical acclaim.

Following his participation in ‘Salon d’Automne’, the director of the ‘Vavin-Raspail’ gallery and art dealer Max Berger started to represent Gounaropoulos in the promotion and sale of his works.

Permanently settled in Paris, in his own atelier at 95 Rue de Vaugirard in Montparnasse, he often visited southern France and painted in the lakeside area of Martigues in Provence.

In 1924, he returned to Athens and held his first exhibition at the Zappeion Megaron, alongside painter Koula Rompapa, presenting 77 paintings from his latest Parisian work. The Athenian public was astonished by his avant-garde paintings. 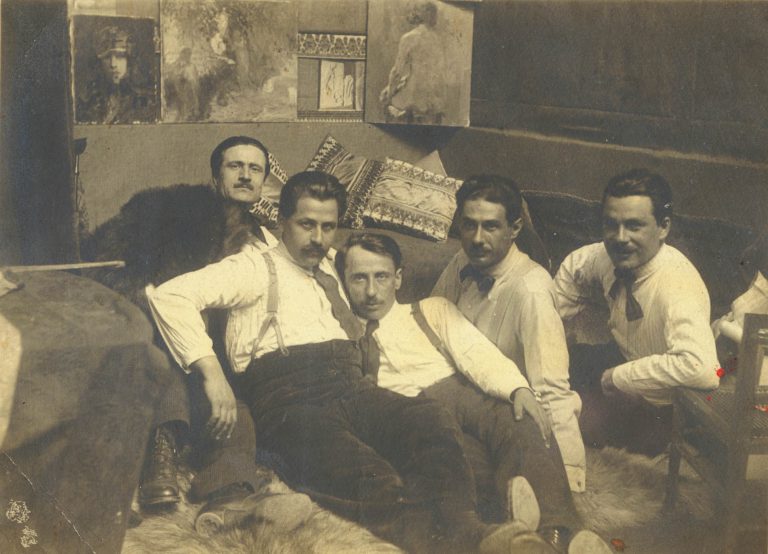 In 1925, Gounaropoulos returned to Paris and devoted himself to resolving the issue of light in his paintings, something that had preoccupied him since his first acquaintance with modern art. This is when his personal style was crystallized, a style thanks to which he was to later be established as one of the most significant Greek painters of his time. In October 1925, he held an exhibition at the influential Parisian gallery ‘Galerie Vavin-Raspail’. The exhibition was very successful, and the art critics wrote enthusiastic accolades for his work.

In March 1926, he held his second exhibition at the same gallery under a permanent cooperation contract, attesting to his recognition as a painter and the appreciation of his work. He conquered the hearts of the Parisian public and managed to convince the publicity apparatus to invest on him. The arrangement of light in the pictorial space that Gounaropoulos proposed was in step with the artistic explorations of the time (1920-1930) and acknowledged by the Parisian art critics as early as 1925. Thus, the personal painting style of G. Gounaro (the name by which he would sign his work ever since) was established and was given special mention in the art press on the occasion of his second personal exhibition in Paris. Articles on his work appeared in the journals: La Vie, Les Arts Plastiques, Le Journal des Debats and in Christian Zervos’s Cahiers d’Art.

In January 1927, he held another solo exhibition at the ‘Galerie Vavin-Raspail’, and in 1928 at one of the three most prestigious Parisian galleries, the ‘Galerie Georges Bernheim’, once again to great critical acclaim. By now, his works could be found in art collections in France, England and Spain.

In 1929, he took part in the ‘Salon des Vrais Indépendants’ and ‘Salon des Surindépendants’. In that same year, he decided to hold his first solo exhibition in Athens, at the ‘Stratigopoulou Gallery’. It was an exhibition that stirred much controversy in the Greek capital and prompted several articles to be published in the Greek press (Eleftheron Vima, Proia, Ethnos, Patris, Acropolis, Nea Estia, Protoporia, Ellinika Grammata, Ethniki Epitheorisis, Fraghelio), expressing admiration, criticisms and ripostes.

From 1919 until the early 1930s, Gounaropoulos lived and worked in Paris, enjoying an established reputation and exhibiting his work in France and Greece.

The economic depression of the years 1929-32 that depleted the buying power of the Parisian art market forced the artist to temporarily relocate to Greece. At the time he was convinced that the economic crisis would not impede his international career, but in 1932 he settled permanently in Greece, in his privately owned house-studio in Ano Ilissia.

He married the composer Marika Proiou and had a son, who would go on to become the architect Elias Gounaropoulos.

The French press would resume its interest in Gounaro’s work during the first years after the economic crisis (1933-34), but by then Gounaropoulos had started to focus on his recognition in Greece. Nevertheless, he would maintain occasional contact with art critics Marius Ary Leblond and Tériade until the end of his life.

Exhibition by the artistic group ‘Techni’ at Zappeion Megaron (October 1931)

Gounaropoulos’s return to Greece coincided with the emergence of an important artistic movement in which the so-called ‘30s Generation’ played the leading role. Gounaropoulos along with other artists who had returned from Paris, such as Michael Tombros and Nikos Hadjikyriakos-Ghikas, as well as with Giorgos Bouzianis who had come back from Germany, infused the Greek artistic scene with international avant-garde trends.

1934 marked Greece’s first participation in the Venice Biennale, with works by 74 renowned artists. One of them was Gounaropoulos, whose work was given special mention in numerous articles published in the Italian press.

The year 1935 witnessed an exhibition that marked a watershed in the evolution of modern art in Greece. It was the ‘Exhibition of the Three’, in which Gounaropoulos, Hadjikyriakos-Ghikas and the sculptor Tombros jointly showed their work.

In July 1937, Gounaropoulos was entrusted by the Municipality of Athens to paint the murals in the Council Chamber of the Athens City Hall. True to his personal style, Gounaropoulos created a magnificent pictorial ensemble of 112 square meters. He employed an oil-based paint mixed with wax to create a mural that represented the history of the city of Athens from ancient times to the modern day. The historically faithful depiction of the figures, clothing and objects was due to Gounaropoulos’s meticulous study of ancient Greek vases, coins, sepulchral steles, statues, and much of the available literature on ancient Greek art. Employing no assistance throughout the duration of the project, Gounaropoulos started working on the mural in March 1938 and completed it approximately two years later.

When World War II broke out and Gounaropoulos was 50 years old, he published two drawings in the newspaper I Niki (Victory), aiming to boost the Greek troops’ morale. The two drawings were I Panagia mazi tou (May the Virgin Mary be with him) and I Niki mas fterougizei (Our victory is soaring).

In 1950-51, Gounaropoulos painted the murals in the Church of Hagia Triada, in the Greek city of Volos. In 1958, he received the Guggenheim Award for Greece.

Alongside his painting, Gounaropoulos illustrated books of contemporary poets and intellectuals, such as Andreas Embiricos, a major Greek poet and close friend of his, Sotiris Skipis, Apostolos Melachrinos, I.M. Panagiotopoulos and Kostas Varnalis.

Gounaropoulos died in 1977, at the age of 88, having attained sixty-five consecutive years of artistic creation. When asked, shortly before the end of his life, whether he was content with his contribution to art, he responded: ‘Yes and no. Yes, because what I gave was authentically my own, part of a truly personal vision. And no, because an artist’s work comprises but a minuscule percentage of his entire vision.’

Mural in the Athens City Hall. The apotheosis of Pericles (det.)

Mural in the Church of Hagia Triada, Volos. The Pantocrator in the dome

The information about the life and work of Giorgos Gounaropoulos is largely based on the monograph by Matoula Skaltsa (Skaltsa, M., Gounaropoulos [in Greek], Athens: City of Athens Cultural Centre, 1990).