Analysis of his work

“Gounaropoulos’s work is thoroughly original, unlike anything seen before. If we were to characterize his painting, we would need to borrow a term from another field of art and call it ‘poetic painting’. In our view, this term fits better than any other, because his painting unfolds within the kind of imaginary, mythical world we find only in certain poets”.

A detailed stylistic analysis of Gounaropoulos’s work can be found in the essay titled ‘Giorgos Gounaropoulos’ by Giorgos Mourelos, a professor of philosophy and close friend of the artist. It was originally written in French for Gounaropoulos’s solo exhibition at the French Institute of Athens in April 1957 and in 1976 was published in Greek by Melissa Publications in its series Greek Painters. The following are translated excerpts from the essay.

Gounaropoulos’s work revolves entirely around several overarching motifs that serve to anchor the entire substance of his art. […] These symbols are implicated in the reproduction of a mythological world rooted in the first stirrings of his childhood imagination. To better understand the meaning of these symbols and the role they play in the artist’s work, we must consider the place where he was born and the environment in which he spent the early years of his life. Gounaropoulos was born in Sozopol, a small town on the Black Sea coast. […] It was only natural that the sea would mark the experiences of the first 15 years of his life.

The world of the sea. To begin with, there was fishing. It was in itself an act of magic, which retrieved from the depths of the sea a myriad of creatures. Fish in translucent colours, shellfish and rose-coloured lobsters filled the boy’s imagination with limpid aquatic forms of silvery iridescence. […] The notion of voyage took root in the boy’s mind. We encounter this sense of Odyssean adventure –this immersion into the unknown– in many of his paintings, among the steep, humanlike cliffs that rise like strange ships in a mysterious sea.

And then there were the women bathing on the beach. It was a profoundly unsettling spectacle for the boy and one which would play a role in shaping his poetic vision. It was these bathers, whose white blouses turned transparent with the spray of the sea, who revealed before the boy’s ecstatic eyes the secret world of women.

Water. It is not surprising that water should occupy such an important place in Gounaropoulos’s work. We encounter it in most of his paintings. […] Even in those paintings in which water itself is not depicted, its presence is suggested everywhere. Throughout the painter’s œuvre water constitutes an expansive, transparent background on which various figures are limned, for Gounaropoulos’s painting is above all one of fluidity. […] Through its presence alone, water adds a dimension of its own to the work: an infinite universe of peace and tranquillity.

Trees and flowers. His trees, […] remnants of childhood fears, express not only a child’s worries but the individual’s inner struggle as well. Their stretched limbs and twisting branches, the almost human coupling of their trunks, express instances of this conflict. […]

The artist’s vitality and plastic expressiveness can also be seen in the wealth and variety of the flowers he painted. […] No two flowers in Gounaropoulos are ever the same. […] Even on their own, his flowers symbolize the breadth of the human adventure – from the ascent to maturity and the richness of life to the gradual dispossession that ends in death.

Still life paintings. Gounaropoulos’s still life paintings […] depict fish and shellfish which, though out of their element, water, quiver with such vital force one would think they are desperately trying to exist outside their natural habitat. These, too, are symbols of our self-struggle.

Mythological subjects. It is in his mythological paintings, however, that the struggle between the two primary elements of his psyche –the artist’s inner anxiety and his search for deliverance– takes its most characteristic shape. The choice of subject matter alone is revealing: Prometheus, Orpheus, Odysseus, Heracles, Cyclops, Pasiphae, they all represent myths in which we discern the struggle of two forces: one of transcendence and elevation, the other, of annihilation […] the utmost anxiety and the utmost serenity.

Among the problems every artist confronts is the one that precedes all others: the configuration of pictorial space. […] The unique character of his art impelled him, once he felt in full control of his means of expression, to create a pictorial space that could accommodate the inventions of imagination and dreams. The artist devoted years of effort into shaping this space. Inevitably, this imaginative and oneiric space would need to be a fluid space that could contain weightless objects, and where lines of perspective would be more freely used, depending on the kind of scene the painter wished to depict. For Gounaropoulos, this space had to comprise two essential features: it needed to be transparent, so as to allow one object to extend into another, and it had to be dynamic. A pictorial space organized on the basis of the physical world as perceived by our senses is one in which objects are juxtaposed so that each lies on the exterior of another. As the laws of physics state, two physical objects cannot occupy the same space at the same time. But the same is not true for psychological states. A state of mind is not set in juxtaposition to another but instead penetrates it. A product of the imagination can be contained within another one. This fluctuating space, where the forms and shapes of objects converge and where boundaries are eliminated, is a space of diffusion and interpenetration. […]

The second feature of Gounaropoulos’s pictorial space […] is its vibrant elasticity. In contrast to the space in traditional painting, which gives the impression of a static space designed to contain objects while preserving its structure, Gounaropoulos’s space is one that is itself in motion in relation to the objects it contains. […]

Given the laws of perspective governing his pictorial space, the volume of objects is rendered in such a way that, while contours do emerge, they acquire their true outline only in relation to an anchoring system of reference situated in the realm of the imagination. This creates for the viewer the impression that the forms depicted in the painting, while retaining their defining features, contours and volume, are not part of the external world perceived by our senses but belong instead to a visionary one. 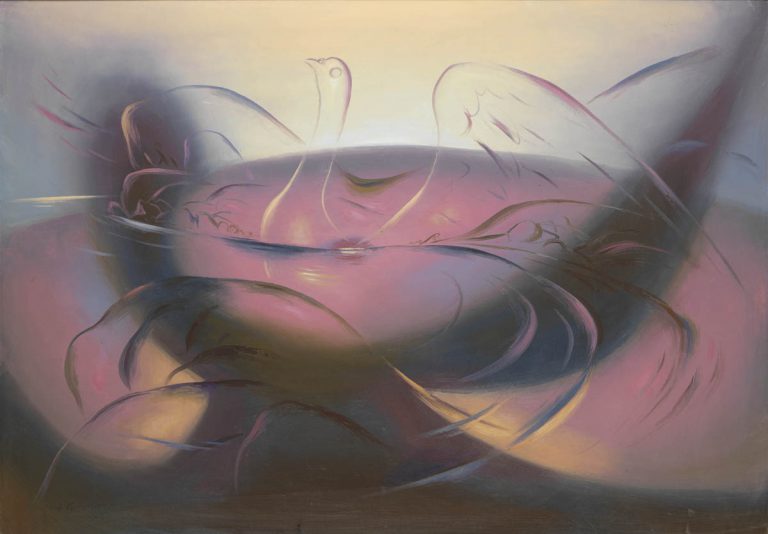 From an early age Gounaropoulos was keenly interested in the distribution of light in painting. As a child he was entranced by reproductions of Rembrandt’s works; as a student he filled his notebook with shapes rotating around a source of light. After arriving in Paris and freeing himself from the constraints of academic art, he turned his full attention to the question of how to configure light in a painting. One could say that the originality of his painting consists precisely in the way in which he distributes light. […]

In his paintings, Gounaropoulos attempts to fuse object and light to create a pictorial space thoroughly independent of natural space. To do so, he breaks with the traditional treatment of light. Instead of illuminating his objects from outside […] he illuminates them from within. Radiating from a hypothetical source somewhere inside the object, like a mysterious centre whose location remains a secret, this light enables the artist to create the impression that his objects are part of a dream-like landscape. […]

In examining the propagation of light in transparent objects, he realized that he could produce similar effects in his painting. If the source of light were situated not away from the object it illuminates, as is the case in the natural world, but within the object itself, he could more easily create the sense that the objects in the painting existed in a transparent, fluid space, one better suited to accommodate the products of the imagination. 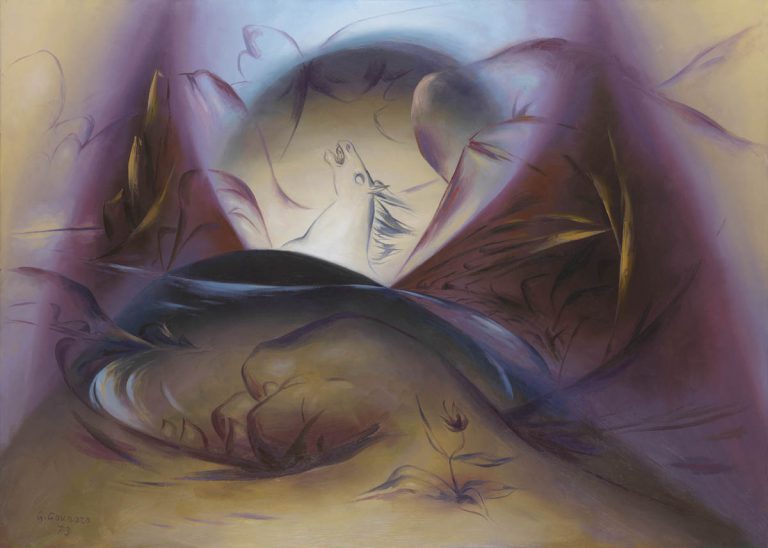 Fully aware of the idiosyncrasies of his art, Gounaropoulos knew that by addressing the problem of light he was addressing at the same time a problem of colour and that to succeed in creating a pictorial space of his own he would need to use not only light in a specific way but also colour in harmony with it. Years of experimentation led him to conclude that the fluidity of the pictorial space, which was required to create the impression of a visionary space, could be rendered by colours whose hues would subtly infiltrate each other, without the juxtaposition of solid masses of colour to disrupt the continuity of the whole.

Thus, while the basic colours he employs are yellow, red, dark red and blue, he uses them not in their pure state but in the following combinations:

Yellow is made by mixing cadmium yellow with ochre.

Red is made by mixing cadmium red with light English red.

Dark red is made by mixing dark English red with rose madder.

Blue is made by mixing cobalt blue with ultramarine blue.

Neither does he use these colours in their natural state as they come out of the tube but after diluting them in a sufficient quantity of linseed oil so that they are nearly liquified. […]

The fluid paint offers no resistance to light and allows it to circulate freely through its own movement. The colours vibrate and come alive, fusing with the light to acquire an exceptional degree of transparency.

The defining feature of Gounaropoulos’s line is the absolute supremacy of the curve. Nowhere in his paintings or drawings is there a straight line to interrupt the hand’s movement. The drawing is executed in a single stroke, the line developed under the impetus of its own dynamism, like a melody that ends only when its theme has been resolved. A visual melody, that gives the space created by its convolutions its special structure and fills it with energy and vitality. What is truly striking in this drawing is the ease with which the artist renders volume with no other device other than the movement of this singular line. […]

The drawing is executed with perfect ease and without the slightest moment of hesitation or corrective motion, thanks to the control the hand exercises throughout its entire movement. The line surges, traces shapes, without once breaking off, it limns contours, gives life to form, undulates, sings. […]

The transparency of the artist’s drawing allows for such a perfect fusion of light and line so that these two create an indissoluble whole. 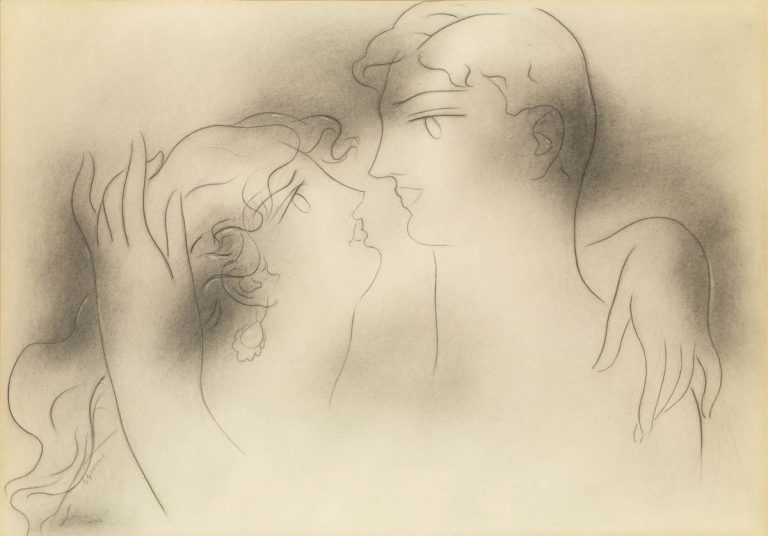